Borna Vlasic, an experimented go-kart racing driver and one of the Chassis Mechanical Engineers of the amazing Rimac Concept-Two tells us about his experience in the participation of the 1st eKarting Play and Drive Pirelli Champioship in Motorland, Spain. Enjoy his history posted on the recognized Auto i tocka Croatian Magazine.

ELECTRIC CARS ARE TAKING THEIR MOMENTUM ALL OVER THE WORLD, SO THE RACING WORLD IS FOLLOWING IT. AFTER FORMULA E, HERE COMES ELECTRIC KARTS. WE HAVE BEEN DRIVING KARTING WHICH IS ACCELERATING LIKE FORMULA 1 AGAINST ONE OF THE BEST KART DRIVERS IN THE WORLD.

Croatia is becoming more popular by a man who started the car industry in it, and that is Mate Rimac. Nowdays there is almost nobody who haven’t heard about Rimac Automobili and the story about young founder who had a vision, and in his garage, with limited budget created green BMW electric car. Very similar story is coming from the Spain. With Formula E becoming more popular, where the engine noise is changed for tough racing in the city centers, there is one more part of racing which is growing. It is maybe the most important racing branch for teaching young drivers, which will be racing in the ‘silence’. Electric karts will definitely become popular. We have visited their inventors, guys who are developing them and creating electric karting championship.

Guys with the vision

It is a young company named ‘Play and drive’. Two engineers came with the idea  of implementing electric propulsion system in the racing vehicles and prove that it has a potential to compete with standard combustion propulsion systems. Their first project in 2011. was Golf GTI MK2 so they converted it to an electric vehicle. Within couple of years of development, they managed to do the same number of racing laps as combustion powered vehicles. And they were able to compete them. When they reached the limits of the chassis, it was the time for a new project – Lotus Elise S1.

In the chassis of mentioned vehicle they have implemented their electric technology and Lotus Elise E-15 was born. With 240 horse power and 750Nm of torque it weight 400kg less than Tesla Roadster. Their work is becoming more popular in 2014. when Motostudent organization is asking them to develop an electric propulsion system which can be used in the future Motostudent projects. The fact which confirms their successful implementation is that Motostudent organization launched electric bikes category in 2016. where all the bikes are equipped with Play and Drive electric propulsion system. After various of successful projects they see the future in the development of electric karts. In 2014. they start with the implementation of this technology on kart vehicles. That is when the first electric kart is born – eKarting EGT1. It has 2kW.h battery, and 26kW motor. Top speed is between 110 km/h and 150km/h depending on the final drive. After the first kart model, they see a potential in the future development, so from 2016., new electric kart model is launched every year. 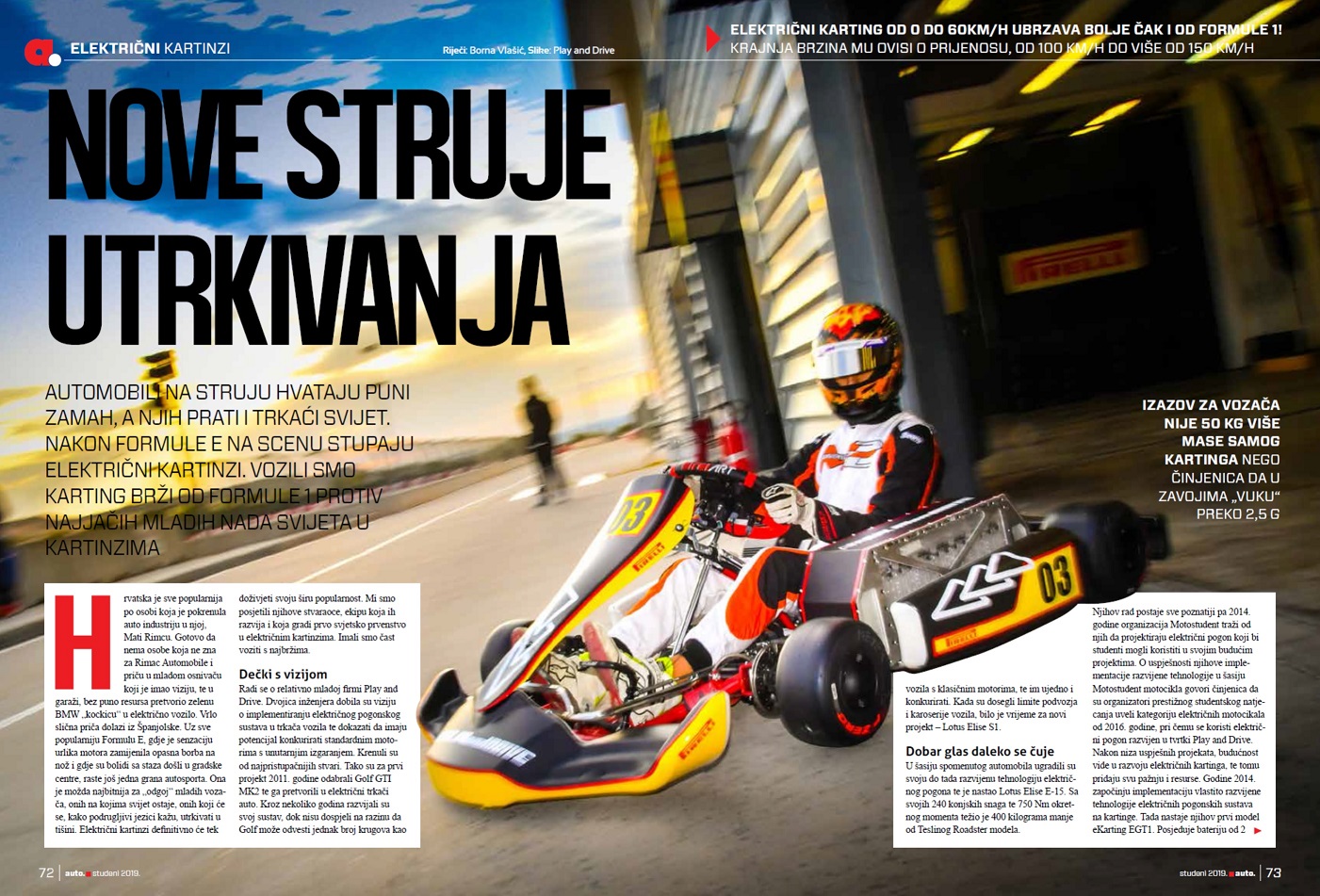 We had the privilege to attend the reveal of the fifth electric kart generation – EGT5. The biggest improvement is the autonomy, because of the 5kWh battery whilst peak motor power is 30kW. With the launch of fifth electric kart generation, they decided to start first electric karting championship to show their products to the world. Last month, from 11th to 13th of October 2019, first every Play and Drive eKarting Pirelli Motorsport championship was held. Organizer’s main idea is to create a championship which would contain 5 races in 2020, but first step is to organize the trial race. It was held in Spanish city of Alcaniz, on circuit Motorland Aragon. The track has FIA certificate for hosting the world championships, which is the proof of track quality. Track length is 1700m which is unusual long for kart tracks, and it contains fast corners and altitude changes which gives this track the finest detail.

First challenge organizers were up to, is to create the format of the race weekend. Until that event, they produced 5 eKarts with the same specifications and race ready. Since it was not enough for a usual kart race, they invented brand new way of kart racing – duels 1 on 1.That way two drivers could be out on track having fight, other two karts are charging in the mean time and getting ready for the next round, whilst the fifth kart is ready if there is some mechanical problem with other four karts. This way of racing turned to be very innovative, interesting and didn’t disappoint at all. For this trial race organizer decided to invite 8 drivers. So, 7 very talented and professional drivers applied for the race from all around the world. They were from Spain, England, Ireland, Monaco, Brazil, USA and Bolivia. Final driver slot was reserved for the guest driver of organizers choice. The guest driver was supposed to attend the event, try the eKarts, take into a fight with great drivers and in the end, rate and promote karts, organization and the championship itself. This time it was us!

The event was held two days in the same format. Early in the morning there were two qualification rounds for each driver, when the time was measured. According to the lap times from qualification rounds, drivers’ standings was created. Duels were based on the principal of ‘first against last’, ‘second against second last’ and so on. The most successful drivers were promoted to semi final races, whilst in the end, two fastest drivers were competing in the last race of that day – the finale. Kart were driving without any technical problem, and on Sunday, first winner of the Play and Drive eKarting championship was announced. Since I’m coming from the world of karting, after which I continued my career in car racing, I was very curious about the whole event. I knew karts are a bit heavier than usual, and electric propulsion system is still not a common thing in karting world. Chassis is used from the regular karting, used in the KZ category which has 6-speed gasoline engine. For the race weekend, every driver has two motor modes to use. Qualification mode, and race mode. The difference is obviously in the power and autonomy. Setup of every karting is the same. The only things the driver can change is tire pressure and brake bias.

Even on the first out laps you can feel the kart weight on the steering wheel. Due to a big battery, it is 50 kg heavier than usual combustion karting. First thought was that it will be a problem, but that assumption was wrong. All you have to do is adapt your driving style. Kart has to be driven with precise and calm style, like driving a shifter kart or a car, and not like a usual kart without the front brakes and combustion engine. If you adapt your driving style, weight on the steering wheel is not a problem any more. The other important factor is tires. All the races were driven on the super soft tire compound which allowed extreme cornering with 2,5g lateral acceleration. It was a huge challenge for the drivers. According to that, feel for the speed was superb. The acceleration is the best factor on electric karts. Comparing to a regular combustion karts, electric ones are accelerating like the most powerful combustion kart – KZ2 shifter kart. The ones who tried them know that it is an extraordinary experience. That kart can accelerate from 0 to 60 km/h faster then even a Formula 1! That extraordinary acceleration of electric propulsion system gives the drivers a chance to risk the cornering and make a mistake. If the driver makes a mistake in the corner with the combustion kart, engine loses revs and it needs a lot to gain them again. That fact makes the electric racing more interesting because drivers are ready to risk, knowing that potential mistake won’t cost them too much. 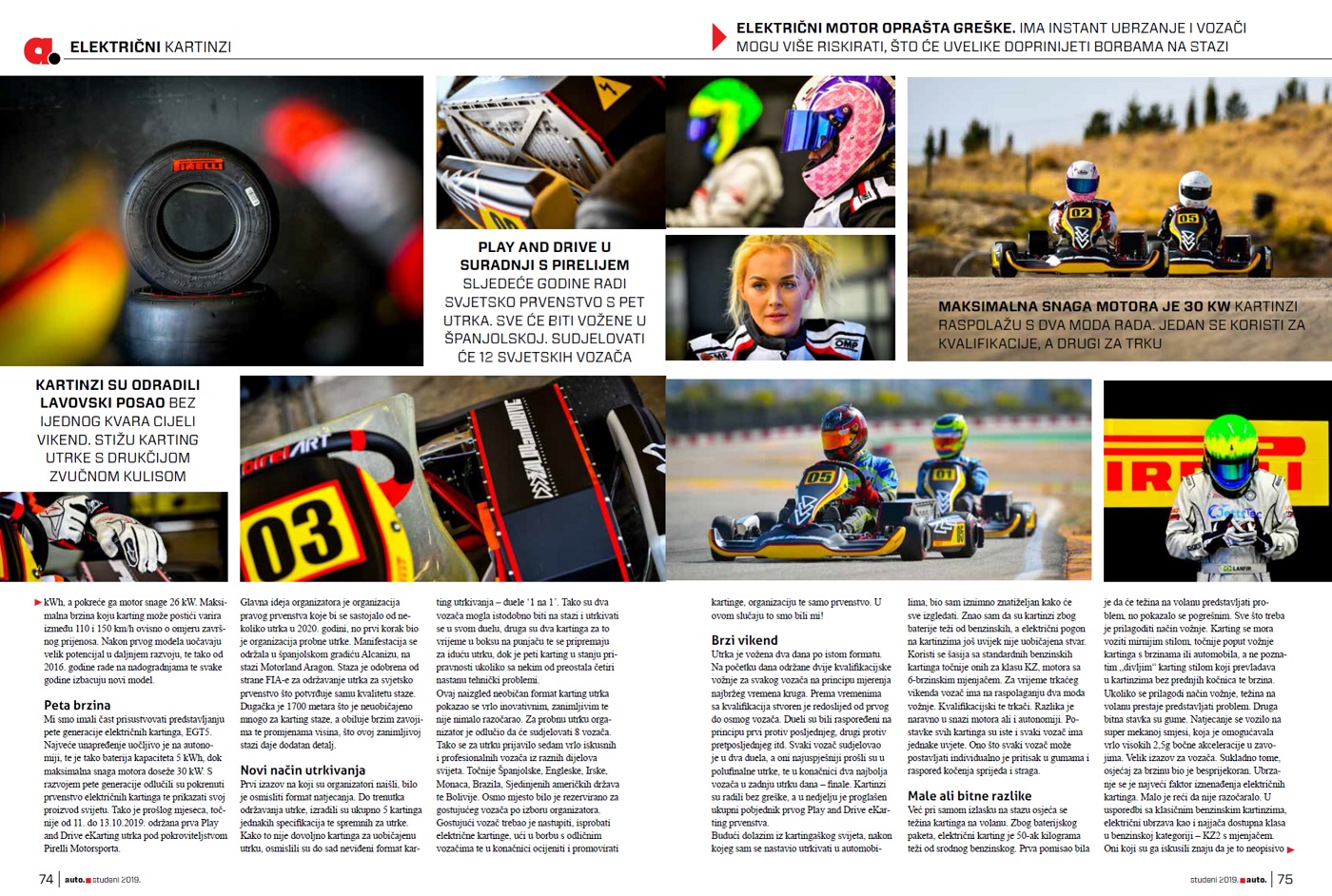 If you are a F1 fan, you must remember first out laps with turbo engines, when not only the drivers were surprised but the spectators as well to hear the tires creaking, which were completely unheard with the noise of V engines without turbo. The same thing happened to me in the first laps of driving electric karts. With only two practice sessions I had before the qualifying, I had to feel the kart, learn the track, adapt the driving style which had to be completely different to what I was used to with my karting without front brakes, and in parallel to that, my concentration was disturbed by the loud tires creaking which I haven’t heard before. In the first couple of laps I was trying to figure out what I’m doing wrong so the tires creak so loud, but soon I realized there is not a combustion engine making a huge noise revving 14 000 rpms but only a quite electric propulsion system and the sound of wind. Even though I was the guest driver with a lot less experience than the other drivers, I surprised myself about my capability to follow them and fight them. I enjoyed every single race with the comeback of the old memories of racing wheel to wheel from the time I was an active karting driver. I left the Spain with a huge positive feeling about the organizer, karting preparation, event organization and in the end, amazing karts which put up with three days of constant driving without a single issue.

Play and Drive planes to organize five races in 2020. Their fleet will be upgraded from 5 to 12 karts which would lead to the change of the racing format, and returning to all known way of racing. All 5 races will be held in Spain, but the championship will be for all the drivers around the world. This could easily be a great school for the young drivers who will set their focus on the driving dynamics, without a noise of the engine. This is definitely the future. 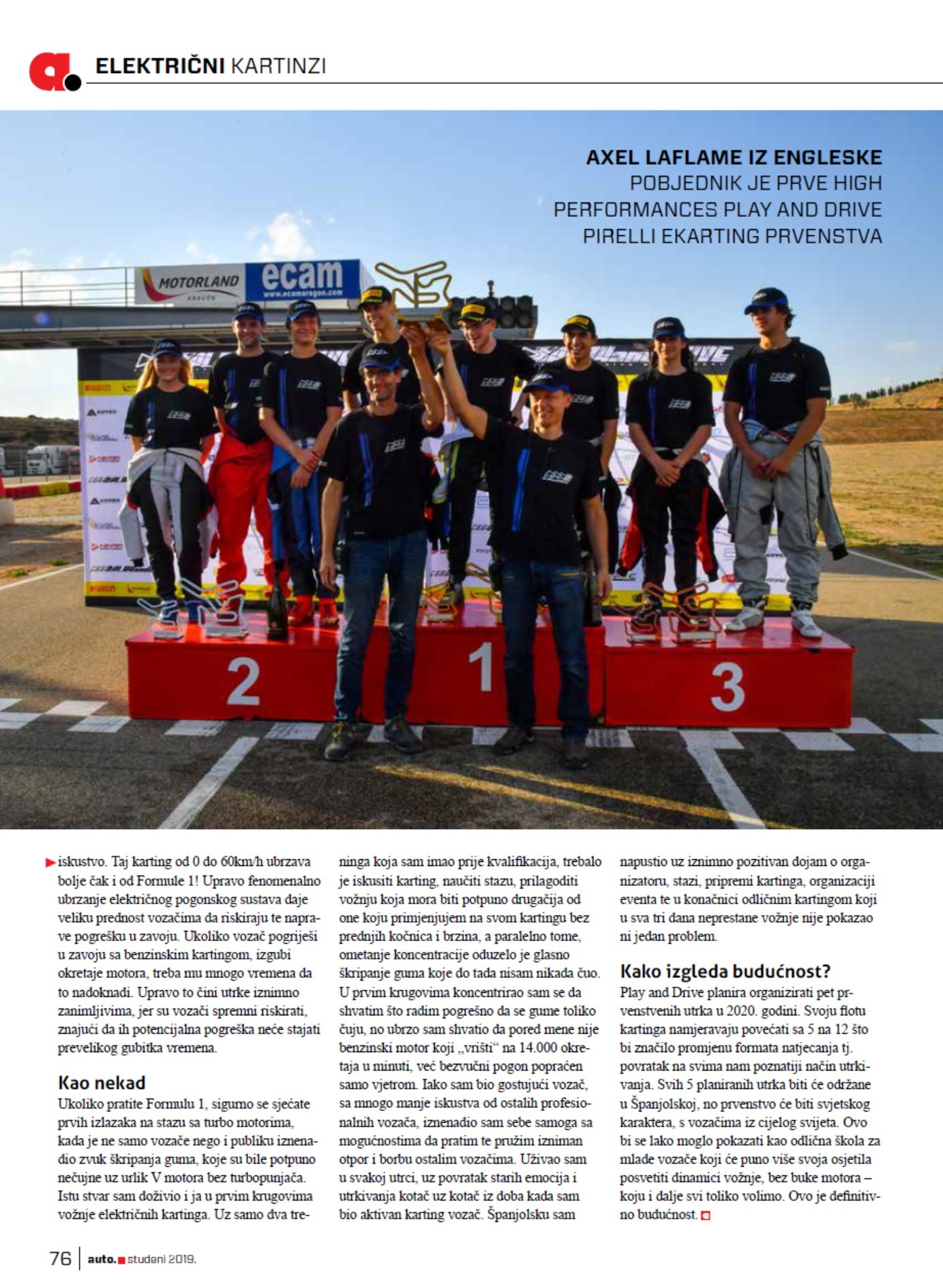