The solution
for the recharging infrastructure.

“Sustainable mobility” that’s really something. Indeed, protecting the environment by using renewable energy on a large scale is complex and not only focuses on the development of longer autonomy batteries. Charging infrastructure for electric vehicles is one of the great challenges to solve and is the key to ensure success worldwide.

Let’s imagine that vehicles already have all the necessary capacity to run 1,000 km with stable, lightweight and cheap batteries. Would be everything already solved? Would be we in the ideal and utopian world of sustainable global mobility? The answer is clearly no. the time it would take to load the vehicle with a household outlet would be nearly sixty hours.
LET’S DO A SIMPLE CALCULATION:

The average consumption of an electric vehicle of middleweight is 18 kW.h per 100 km.

Obviously, domestic outlets will be used (and they are already used at present) for short urban journeys, but never for long distance journeys. Fortunately, fast and moderate recharging modes already exist since some time ago with a power of 22 and 50 kW respectively and in the near future 120 kW (super fast recharging, as TESLA). With these powers, we would have these load times:

180 KW.h/ (120kW x 0.85)
These values are much more acceptable but still fall short of a normal waiting time during refuelling, so it is necessary to find even greater recharge powers for a future that is already here. And here it is where problem lies: place such a wide charging point’s network so powerful, it is not possible today in most existing power grids.

One solution that helps mitigate some of this problem is the use of energy storage systems, which can accumulate energy during valley periods and deliver it at peak times recharge, helping to smooth the demand curve.

In Aragon we have a pioneer project called SIRVE Proyect, which is developing the technology needed for this and it is building two experimental stations in Zaragoza.

The SIRVE stations are composed of a quick charger, a moderate one, three slow charger, a battery pack, a regulator and solar power panels. The idea is to develop an intelligent system that is capable of modulating the punctual energy absorbed by the network, regulating the energy delivered to or from the battery pack and controlling at the same time the limitation of energy delivered to the vehicle in charge. In this way we can control the power of the network so the electrical installation in which the station is part, must not increase its hired power by the fact that they placed superchargers..

Play & Drive as knowledgeable about technology related to lithium batteries, has participated in the Project SIRVE building and providing battery packs. 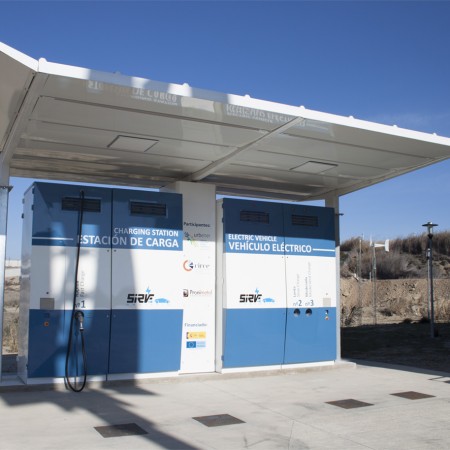 Battery pack for SIRVE stations has these
general characteristics:
The battery pack is designed to deliver 50 amps at 400 volts, that is, 20kW of rated power and it is able to accumulate 18kW.h of energy. These values are more than enough to test this new system recharge as average autonomy of current electric vehicles is around 24 kW.h. On the other hand, when the system loads in moderate or fast, will be consuming part of the energy of the batteries and part of the network, according to the power available in header.
For more information of the developed product, download data sheet.